LIVING IN A MATERIAL WORLD: POP AND MATERIAL CULTURE OF AMERICA
Search

THE LIFESTYLE OF A CELEBRITY

What do you think of when you hear the word “celebrity”? Do you think of a person, a feeling, or a title?  According to Josephine Campbell and Salem Press Encyclopedia, a celebrity is defined as a state of being famous or widely known and as a person who achieves this level of prestige. The term has been around a lot longer than many people would believe with a variety of different states, but the feelings we get when we it remains the same only exemplified. The lights, the camera, the fame, and the fortune are the main aspects of the celebrity lifestyle tie deeply into the feeling we all get and the fantasy of living that life is something that everyone secretly desires.  With all the fame and being in the lime light it is common to view all the big names in Hollywood’s homes, cars, clothes, and even the love and admiration they receive from the public. In the past you would see these materialistic thing that celebrities flaunt on magazines and billboards but now in the modern-technological world you can see on television and all through out social media. The world now has become filled with the thrills and aspirations to follow all the latest trends in the material world and to one day be worshiped like the celebrities they follow.
​

The glitz and the glamour of the celebrity world is displayed everywhere from magazine stands to Instagram feeds. Celebrities live the lives that many people dream of like riding on private jets and planes, wearing custom made designer clothes, expensive and rare cars, dwelling in luxury houses, and being admired by the world. Many celebrities know they have an influence over the world that can be positive and sometimes there is a negative effect that encourages the youth of this world that these are things it takes to be successful. Pictures posted with money and other materialistic items with cocky quotes about success and entitlement is a common occurrence. In hopes to live like their favorite celebrities and follow the example what society expects from them, many people buy and work hard to get those items to please society and not themselves. There is nothing wrong with looking at the lives of celebrities and pursue that type of success but it is about following the path of success destined for you.​At the end of day when the money and the cars are gone the only person you have is yourself and it is better to strive for a life with family and philanthropy culture instead of material. 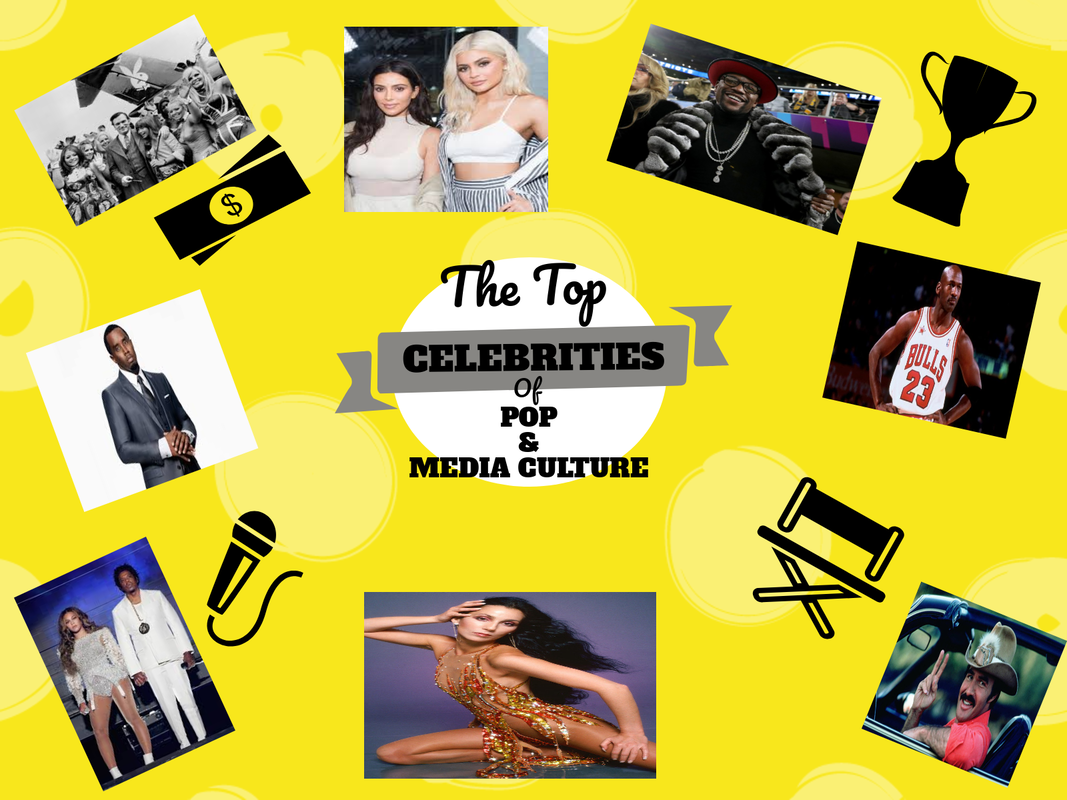 Infographic poster about the major celebrities and icons of the past half a century. These celebrities are know for their lavish lifestyles, money, connection to pop and media culture whether through music, movies, physical appearance, and entrepreneurship. Some of the examples of the 1970s and beyond are Cher, Hugh Hefner, and Burt Reynolds. Hugh Hefner invented the construct of what is beautiful and sexy with the popular Playboy magazine and as well the idea of what being the "Man" is about. Burt Reynolds was a well known sex symbol of the 1970s who everyone wanted to be and every woman wanted to have. Sport star Michael Jordan paved the way for many athletes turn moguls as he has a very popular shoe line with Nike. Jay Z and Sean "Diddy" Combs are musicians that also turned into hip hop moguls with multiple deals and creations. Beyonce is another musician like Cher who took to the big screens and created there own signature impact to pop and media culture with performances and unique stage wear. The Kardashians and Jenners took reality television into a beauty empire with some of the most popular makeup lines and staring some makeup trends for todays youth. Floyd "Money" Mayweather is star inside and outside the ring and he isn't afraid to show his wealth. Images found through Google Images.

Fame and popularity is all about the feeling that everyone knows your face, your name, and who you are. In today’s world with the constant view of the celebrity lifestyle many peers desire to be in the lime light and will do everything to accomplish it.  When you look at your favorite celebrities’ life and see how much people love and admire them it is a constant wish to many young people. With the inclusion of social media many people alter their lives and act as if this is their life on the day to day basis. People drive on of the feeling of everyone liking and admiring them which is all to common for celebrities however many celebs wish they didn't have all the glitz and glamour but just people who genuinely care about them. Everyone wants to be famous but can they handle the lifestyle when people aren't cheering but instead booing your name. Fame shouldn't be about the followers you have but is should matter whether those followers will still follow you when the money and the fame is gone. 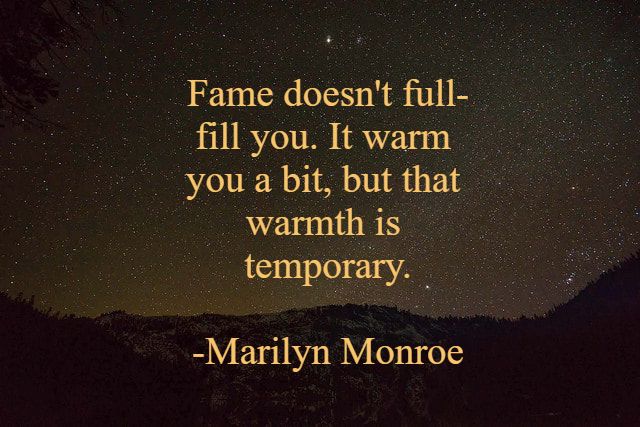 ​There are several factors that determine what makes us humans being and two of those major factors are ethics and creativity. With the increase of celebrating a material world it is a big question on whether we have lost the ability to determine what is right or wrong. Is the idea of “following the trend” morally right to allow people to obsess over these things and having the knowledge that this can be dangerous as well as the ability to make things better.  In this society now, people justify and worship the lives of celebrities that it brings up the question have we lost our humanity and sense of morals do to these obsessions. We put celebrities on too high of a pedestal that makes them feel invincible from consequences and makes us forget they are humans just like us. Human beings make mistakes and we have to realize that everyone makes them we just have to follow the moral compasses instilled in us in order to lead society back to humanity and to help future generations.

Creativity has begun to change as well because there is a question of whether people are genuine creative and not following along with what everyone is doing. Its hard to say what genuine creativity is because everyone can be influenced by others, but there are times where people go to the extremes even to change their physical appearance just to be like someone.The wonderful thing about human beings is that we were each beautifully crafted and there is no one like us so maybe we should take that uniqueness and share that gift to society. It should not matter what trends or celebrities to follow its about following your heart and being the best you and not best of anyone else.

Many state that this is just society but the thing about society is that it can always be changed for the sake of humanity. 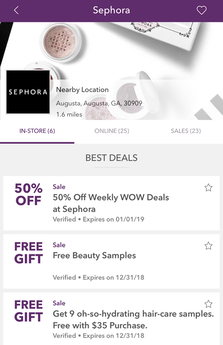 Clothing, shoes, and even makeup are items that can be very expensive but it possible to purchase these items. Discount stores like TjMaxx buy some overstock items from high end brands like Michael Kors, UGG Australia, Ralph Lauren, Calvin Klein, Nike and some other big names. The trick to these stores is looking through the racks and also ask a worker when they put items on the floor, so you can get the best items for the lower price. Shopping with coupons may seem old fashioned but today it has become extremely helpful and more technologically advanced. RetailMeNot and Groupon are some good examples of where you can find some good coupons for great stuff. Now if you really want the best of the best labels try buying these of second-hand stores like Goodwill Boutiques. Also do some in-depth research on line about bi-annual sales for major fashion houses or like many people in the year of 2016 with the “Yeezy Boot” DIY (A.K.A. Do It Yourself) your fits.

Houses and cars are some of the trickier items to “finesse” but it can be done with a little hard work and patience. If you have the time and patience just save up your money for that new car but also make sure you are buying it because you want it and not to please others as well as ensuring you can financially maintain these items. However, if you can purchase the older version of a car because in this day in age retro is the newest thing but make sure you do some research and ask many questions before deciding. Sometimes you cannot change what you have but what you can do it appreciate so give your car and house or apartment a good cleaning, for your apartment add some new accents like throw pillows, lamps, and rugs. You can also look up some DIY videos on YouTube or the living and lifestyle channels on your local cable provider.

Travel is something that all the celebs do and guess what you can do it too with some planning, saving, research and some couponing. Planning is a good strategy to living your best life by determining where you want to go. Traveling with groups can be fun and ease your cost by splitting the price of a hotel and transportation. Using Groupon can save you some money on activities, flights and even hotels. Saving your money up for a nice vacation is a great idea that way you can go on nice trip and splurge a little while you are there. Researching where you can go is a great idea because traveling to some areas can be cheaper and safer.


If you want more info on how to live like the celebs without spending all the cash in your piggy bank search up some DIY videos by some you-tubers but put your own spin on it so that you get that celeb style with your own spin! Also remember to live your life for yourself living like a celebrity is nice but remember who are and that celebrities are humans just like you! 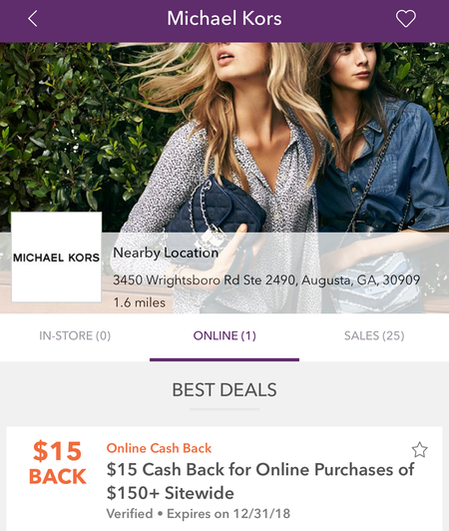 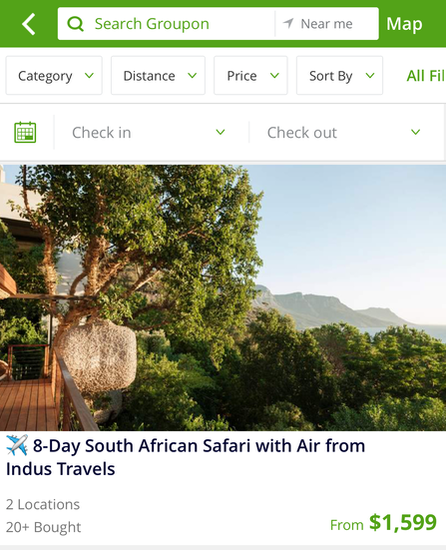